kay, before I go on, let me tell you a little bit about this place. It used to be where the ruler lived, (you know, the guy I told you about in the previous post) but now it’s a hotel. You can also visit.

here. are. some. pictures. 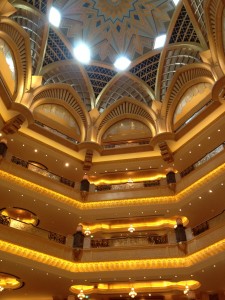 This is looking up, standing in the center of the building. 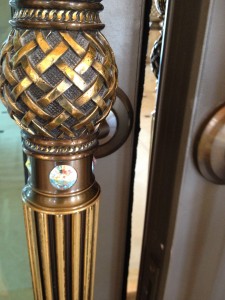 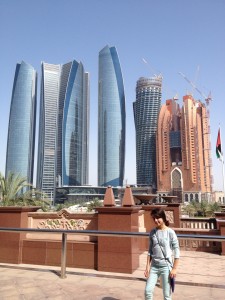 The view outside the palace…. 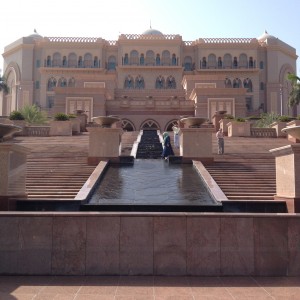 And the actual palace. HUGE!

They’re building a new palace, I have no idea why. The new one is all white, like the white house. Anyway, after the Emerates palace, we went to this huge mall. I have no pictures. 🙁 wait- I might have a few… ah well. Okay, the money system. Instead of dollars, it’s dirhams. The abbreviation is DHS. This is how you say it: deer- hams (plural) The “r” at the end of deer isn’t so heavy, it’s kinda like a flick of your tongue. This is what they look like: 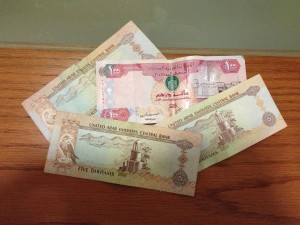 Cool, right? One dollar is equal to 3.7 dirhams. So, back to the title of this post. What was it again? Oh yeah. “Abu Dhabi dress” So, I haven’t told you what some people dress like here, but you can pretty much guess. You aren’t allowed to take pictures of the people here, which s why I can’t really show you. I can kind of show you how the men dress though… 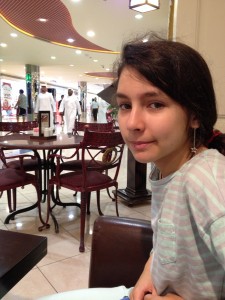 The reason I say “kinda” is because, as you can see, they’re in the background. Like I said, you’re not allowed to take pictures of the people here. Just click on the picture to make it bigger, and the it’ll be easier to see them in the background. They’re wearing a white robe thing, and a thing on their heads. Sometimes though, they’re not wearing the thing for their heads. Not all men here wear this, most of them don’t. 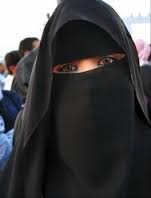 This is what the women wear. Most women from here don’t cover their faces, but some of them do. A few even cover their whole faces, so you can’t even see their eyes, and you can’t see any skin. It’s a black cloth that goes over their faces, and they can see through it. A lot of women only cover their hair, and then from shoulders down they wear normal clothes. (sometimes the head coverings aren’t black) And I don’t even know WHY!! WHY?!?! You know, I guess I could just look that up…Yeah, I guess I could just go do that…. 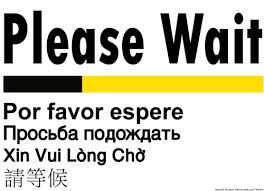 The things that the women wear (to cover the shoulders and part of the head) is called a hijab, which I have no idea how to pronounce. Maybe it just sound like what it looks like? Anyway, in the picture above, the cloth thing below her eyes, that’s called a niquab. okay….uummm…I found something a bit useful…The original reason for wearing an abaya (the black robe) is to prevent from revealing any physical shape. I’m not even gonna write about the names of all the things the men wear, because the names are all super long. Or maybe I’m just feeling lazy. Whatev. So. Still gotta find out WHY. kay, the site (or is it cite?) I’m on says that it’s NOT because of religion, but when they wear the stuff, it’s a sign of belonging to the Arabic culture and the Muslim religion.

So I guess I kind of covered the whole “Why” question. oh, heck, I’ll just call it mission accomplished. 🙂 See you tomorrow!